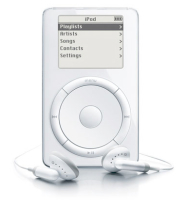 My original 5 gig iPod, purchased in November of 2001, still boots, still charges, and still works. October 23 was the anniversary of the initial announcement regarding the then new iPod, and while mine still works pretty much as well as it did in 2001 (the battery is not what it was), I subsequently became a delighted owner of first a first generation iPhone (now, sadly, with a damaged sleep/power button) and then, an iPod Classic, and, last January, an iPhone 3gs.

I started using my first iPod at first to store music, and then to sync data. It wasn’t long at all before it became an essential teaching tool for me, as I noted in this blog post from 2004 written in response to a piece in The Chronicle of Higher Education about the Duke iPod project.

I note for the curious, that The Chronicle is still usually hopelessly inane regarding teaching with technology, despite their recent harried push at becoming cool with respect to instructional technology.

Buy me a Coffee! If you find this post or this site interesting, and would like to see more, buy me a coffee. While I may actually buy coffee, I’ll probably buy books to review.