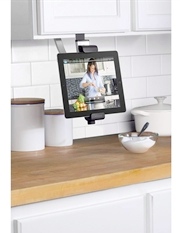 In the course of working on an article about the iPad and various stands, I discovered that two of my favorite stands from Belkin, both designed for kitchen use, are on sale at Amazon at pretty decent discounts.

First, the Belkin Kitchen Cabinet Mount for iPad 2. As you can see from the image, this is a stand that attaches to a kitchen cabinet. A strong but adjustable clamp grips the cabinet, and the iPad goes in the rubber-coated brace. The brace fits tablets ranging from 7 to 10 inches, so it would work with other tablets. I like very much that the Cabinet Mount is designed to be installed and removed fairly quickly without tools, so that you could stash it in a kitchen drawer and set it up as needed. Belkin’s list price is $49.99; Amazon has it for $33.31.

also like the Belkin Chef Stand + Stylus. (Amazon for some odd reason calls it the Belkin Kitchen Stand and Wand“). It’s a stand that allows you to use the iPad on your kitchen counter, with a companion stylus, keeping the iPad out of the way, yet usable, and food-free. Right now at Amazon, it’s $21.98, vs the list price of $39.99.

I note as well that for those with a spare iPad 2 lying around, the Belkin Fridge Mount for iPad 2

is pretty nifty. It uses removable 3M mounting strips to attach the mount to the fridge, and the mount has magnetic clips that use the built-in magnets on the iPad 2 to grasp the iPad.