The Brydge iPad keyboard began as a Kickstarter project. New owners based in Singapore took over in 2014, and the current models are improved. You should look at the Brydge Keyboards Website for a high resolution tour of the Brydge keyboard models. Better still check out this video.

There are three versions of the Brydge iPad keyboard:

Brydge sent me a Brydge+ with Speakers and the Brydge case for the covered iPad for review. I’ve tried two iPad Bluetooth keyboards that function as a cover, the Adonit and the Zagg, and the Apple Bluetooth keyboard. The Brydge Keyboard is, for me, the best of the three. There’s a lot that I like about it, but the primary feature for me is the keyboard feel. The keys can stand up to serious typing, from a rapid typer. While it’s not as comfortable in some respects as using Apple’s standard Bluetooth keyboard, the Brydge is portable, and realistically, the Apple is not.

What’s In the Box

The package comes with the keyboard, a quick start guide, a micro USB charging cable, and shims. The shims are silicon caps that slide over the aluminum hinges on the Brydge depending on whether you’re using an iPad 2 or an iPad 3 or 4.

The Brydge + is made of anodized aluminum, with a look that matches the iPad case of my iPad 3 exceedingly well—it’s very Apple like in look and in feel. The Brydge has rubber feet on the bottom of the Brydge, and small rubber pads below the keyboard on the palm rest so that the screen of your iPad doesn’t contact the keyboard. Depending on which iPad you’re pairing the Brydge with, you slide the shims on the aluminum hinges, then slide your iPad in the slot of the hinges, turning the iPad so the camera and controls are not covered by the hinge of the Brydge.

Pairing With Bluetooth on your iPad

The instructions for pairing the Brydge and an iPad are very clear, and fairly standard. However, the built-in speakers on the Brydge need to be paired separately, though, again, the process is standard and the directions are straight forward.

This is not a standard keyboard layout. It has a number of special function keys for the iPad: 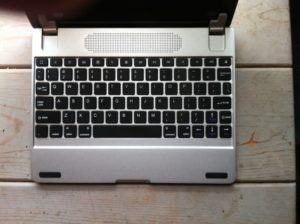 I really like the responsive feel of the keys on the Brydge compared to other iPad keyboards I’ve tried. I’m accustomed to using a laptop keyboard, and am quite comfortable typing on an 11 inch keyboard. I adjusted very quickly to the Brydge keyboard. Now, having said that, the first hour or so I used the Brydge, I twice hit the special Lock key on the top right, which triggers the iPad’s lock screen. I very quickly adjusted to being slightly more cautious about which key I hit when aiming for the Backspace key. Some reviewers had difficulty hitting the Shift key, since the up-arrow cursor key is just to the left of the Shift key; this wasn’t a problem for me, but I routinely type on small keyboards. Even placing the iPad with the Brydge on my lap and keyboarding, the Brydge feels solid and stable. I did find myself forgetting that I wasn’t using a laptop in that I would attempt to use the non-existent touchpad, instead of using the iPad screen. I especially like the presence of the standard Mac Control, Option and Command keys; the presence of standard Apple keys are one of the reasons I like Apple’s Bluetooth keyboard so much. It’s enormously efficient to use standard keyboard commands for Copy and Paste while editing images, for instance. You have the image editing advantages of the iPad’s touch screen, and the advantages of the keyboard as well. The cursor keys are also extremely useful.

The sound is surprisingly good, much better than I expected. It’s certainly more than adequate for watching videos or films, playing games or casual music listening. The angle of the iPad seems to affect the acoustics in positive ways. You can toggle the Brydge speakers off and on by pressing Control-B on the iPad keyboard. Pressing and holding Control-B will un-pair the speakers so you can pair another device. The speakers don’t automatically pair; you need to deliberately pair them if you intend to use them.

Once the Brydge is paired and connected with your iPad, the back of the iPad becomes the top of a clamshell. “Closing” the clamshell by lowering the iPad until it touches the Brydge keyboard works much like closing a magnetic-hinged iPad cover; the magnetic hinge on the Brydge tells the iPad to sleep. The Brydge automatically sleeps if it’s on and not being used for a few minutes. Pressing a key (and waiting a second) wakes the Brydge. Pressing Ctrl-B on the keyboard for a few seconds turns the speakers back on.

I used the Brydge and the iPad for most of my computing this past week (the exception was using SFTP). That includes lots of writing, not only blog posts, but email and longer pieces using several apps. The fact that the Brydge supports standard Mac keyboard commands for italics and high ASCII characters makes it easy and efficient for serious writing. I also listened to music, watched videos, and finally, had to resort to streaming music for the last two hours in order to run down the battery and see how long it took to recharge. The recharge to a full battery was a little over two hours. I absolutely believe that casual use would allow the battery to remain charged for weeks.

I am really impressed with the quality of the Brydge manufacturing and design. It’s style is very much in line with Apple’s iPad aesthetics. The Brydge keyboard feels really solid, though I would have expected a warranty longer than six months. This is by far my favorite of the portable iPad keyboards I’ve tried, and compares very favorably with a quality laptop keyboard. I’m now deeply curious about the low-end polycarbonate model; it strikes me as the perfect companion for a student using the iPad to take notes etc.

For more information, see the Brydge site, and especially, their Brydge FAQs. I’m impressed enough that I’m not only telling everyone I know to check them out, I’ve become an affiliate.