When I got my first laptop (a PowerBook 180) I thought it would be just the thing for taking notes in my graduate classes, particularly since I’ve always loathed my very obviously dyslexic cursive handwriting, and even my more legible (but slower) printing.

I soon realized that for all the ease of formatting my typed notes, I didn’t remember the contents of lectures nearly as well as when I took notes by hand. Moreover, when I began preparing for my Ph.D. qualifying exams, I discovered that it was more effective if, after I compiled my notes on the computer, I annotated them by hand.

There’s some research that supports my personal anecdotal experience about handwriting encouraging retention. Some of it has not yet been duplicated by other researchers, so salt to taste.

Pam Mueller (Princeton) and Daniel Oppenheimer (UCLA) tested the retention of students taking notes by hand versus those using computers. The students using computers tended to transcribe, word-for-word, the content of the lectures. Even after researchers explicitly told laptop using students not to simply transcribe the lectures, they continued to transcribe word-for-word, and performed substantially poorer on tests than those taking notes by hand. According to Muller and Oppenheimer, “It may be that longhand note takers engage in more processing than laptop note takers, thus selecting more important information to include in their notes, which enables them to study this content more efficiently.” The most dramatic result in terms of the two groups of test-takers were in terms of questions that were conceptual; students using handwriting performed significantly better than those students using keyboards.[ref]See also: (Take Notes by Hand for Better Long-Term Comprehension – Association for Psychological Science
A Learning Secret: Don’t Take Notes with a Laptop
Handwriting vs typing: is the pen still mightier than the keyboard?
Attention, Students: Put Your Laptops Away[/ref]

In terms of the neurological and physiological aspects of handwriting versus keyboarding, while keyboarding is substantially faster, allowing for word-for-word transcription, handwriting forces the writer to concentrate on the physical aspects of forming the letter while simultaneously visually paying attention to the tip of the pen. Writing by hand uses different parts of the brain, and more of them, than keyboarding does, which may have something to do why those writing demonstrate better retention than those who keyboard.

In an essay regarding the necessity for more research into the complex interactions between our brains, hands, and eyes in writing by hand, researchers Anne Mangen and Jean-Luc Velay note that

Our body, and in particular our hands, are inscribed in, and defining, the writing process in ways that have not been adequately dealt with in the research literature. The current radical shift in writing environments mandates an increased focus on the role of our hands in the writing process, and – even more importantly – how the movements and performance of the hand relate to what goes on in the brain.

Writing by hand changes our the physicality of writing, and consequently, our memory. As we concentrate on forming the letters, we’re using parts of our brain that we don’t use when we keyboard, and that appears to assist both memory and recall. Researchers and Psychology professors Dung Bui, Joel Myerson, and Sandra Hale from Washington University discovered that students taking lecture notes via a computer keyboard demonstrated better immediate recall than students creating well-organized lecture notes by hand, but that about twenty four hours later students who keyboarded their notes performed worse on tests about the material than those who wrote their notes by hand. The researchers concluded that keyboard notetakers had poorer recall than those taking notes by hand because they were not actively summarizing and synthesizing key points, as much as they were engaged in transcription. According to them:[ref]See also: 3 Scientific Links Between Handwriting Your Notes and Memory[/ref]

Taking organized notes presumably involves deeper and more thorough processing of the lecture information, whereas transcribing requires only a shallow encoding of the information. 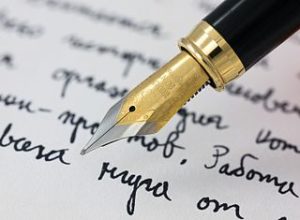 Certainly for me, when I write notes by hand, I am in making the information more mine; I am condensing it and emphasizing key concepts and connections between concepts, in ways that I am not when I merely transcribe. Consequently, the information is mine, and I can recall it more effectively. This same memory effect applies to other kinds of information beyond taking notes; when I write a date and time in a calendar, the appearance and shape of the characters remains in my memory as a visual impression in ways that adding an appointment in my online calendar does not.