Bicolor pencils with a red core on one end and a blue core on the opposite end are often called “checking pencils,” or “editing pencils” because they are often used for copyediting and proofing on hard copy. Sometimes one color would be used by the copy editor and another by the proofer or typesetter. Sometimes red was used for corrections to the type and blue for notations like STET. Sometimes the copy editor used one color, and the typesetter another. More recently bicolor red and blue pencils have become very popular with people annotating books and printed articles, and for adding color to bullet journals, as well as for use in editing and grading.

I’ve been using bicolor and color pencils since I started grad school, for annotating and editing, and for the last few years, I’ve also been using them for highlighting and annotating my bullet journal. I discovered the Caran d’Ache BiColor 999 fairly early, and stopped looking. For the last few years I’ve been buying single pencils from C. W. Pencils, one or two at a time. But as the Caran d’Ache are both pricey (the last ones I bought were $3.00/ea and concerned that C.W. Pencils may stop carrying them (I don’t know that they will or they won’t, but they’re not available at C. W. Pencils currently) I decided to try some alternatives.

I can’t get the image to show the colors quite the way they look; I do apologize. 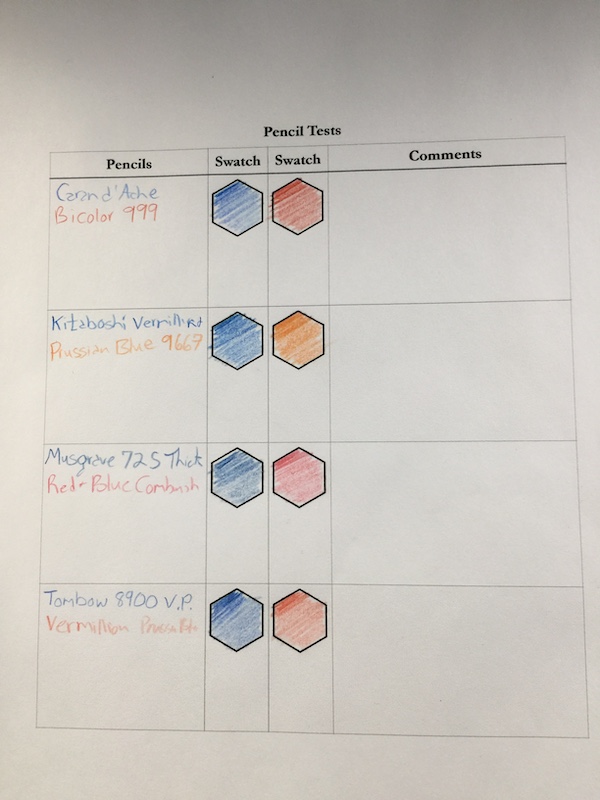 I really wanted to like this pencil; I’ve liked other Kitaboshi pencils, especially the Kitaboshi 9606 Academic Writing. The Kitaboshi 9667 Bicolor is a round pencil. The large gold script imprint doesn’t say Kitaboshi, but the Kitaboshi north star logo is quite clear. The blue is a perfectly acceptable blue. Both cores are fairly smooth though the feel against paper is a little waxy. But the red isn’t red. It’s orange. Despite what the imprint says, this red isn’t vermillion it’s a definite orange.

This is a very round pencil and the cores are noticeably thicker than usual, even for color pencils (though I was able to sharpen it with a standard sharpener). The seems a hint darker in hue, a little more black than most, but it’s still Prussian blue and the red is red, though paler than I’d like.

The Tombow 8900 V.P. Bicolor is another round pencil. The imprint is gold, and the dragonfly logo looks lovely. The blue is ok, though a little light; the red is a slightly more red version of orange than the Kitaboshi, but it’s still a bit too orange for my taste, and it is quite pale.

I’m not the only person to review a selection of bicolor editing pencils. Ana of the Well Appointed Desk reviews a similar selection here and Ana has another set of reviews a year later. Less Harper of Comfortable Shoes Studio reviews red-blue bicolor pencils here. For my part, I’m not really finding anything I like nearly as much as the Caran d’Ache 999.  If I have to use another bicolor red and blue checking pencil, I’ll probably go with the Musgrave Harvest 725 Thick. The Musgrave Harvest 725 not as satisfying or easy to use as the Caran d’Ache 999, but it’s about 1/6 of the price of the Caran d’Ache and it’s not awful.

ETA: I just received a Mitsubishi 2637 Vermilion and Prussian Blue bicolor pencil, and honestly, it’s almost as nice as the Caran d’Ache. It’s not a cedar body or FSC, it is a hex pencil, it is fairly easy to sharpen, it’s smooth, the vermillion is very dark the blue is a true Prussian blue. Single Mitsubishi 2637 pencils are $1.20 at JetPens.com, and a box of 12 is $14.00. This will be be my option if I can’t obtain the Caran d’Ache 999.